Earlier this month, Ezra Klein of Vox.com wrote a disturbing article about the changing nature of Americans’ identification with political parties. In it, he looks at the results of a recent study by political scientists Shanto Iyengar and Sean J. Westwood, whose research suggests that party affiliation isn’t simply an expression of our disagreements on ideology or issues. Rather, it’s a matter of tribalism: the transformation of party affiliation into a form of personal identity that reaches into almost every aspect of our lives.

In their study, titled “Fear and Loathing Across Party Lines,” Iyengar and Westwood write about [PDF] an increasing intrusion of partisan behaviors into aspects of everyday life that are not ordinarily coded as political. They cite “likes” and “follows” for social media accounts associated with Republican and Democratic political figures, as well as for partisan television news-analysis hosts from networks like FOX News and MSNBC. They cite studies that suggest that residential neighborhoods are becoming increasingly politically homogeneous, and that parents are increasingly likely to express displeasure over the prospects of their offspring marrying into a family with a different party affiliation. 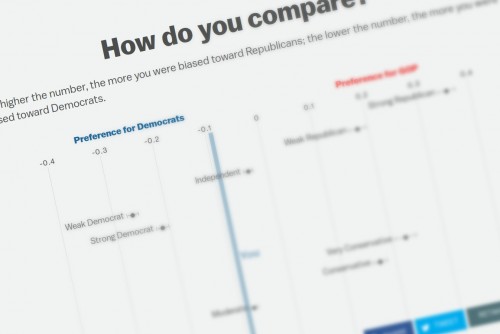 In an interview that Klein conducted for his article at Vox, Iyengar says that it’s almost certainly not a matter of increasing ideological extremism among voters from one party or another. If you look at Americans’ positions on the issues, Iyengar says, they are much closer to the center than their elected representatives. And yet, Klein writes, since the 1980s, Republicans’ feelings towards the Democratic Party, and Democrats’ feelings towards the Republican Party, have dropped off a cliff.

In order to find out how this works, Iyengar and Westwood conducted two experiments. In one, they used mock scholarship applications to measure participants’ political and racial biases. They impaneled 1,021 people and asked them to choose between fictional high-school age applicants displaying four characteristics: Democrat, Republican, African American, and Euro American.

The result was that, more than any other factor, it was party cue that exerted the strongest impact on selection for the largest number of participants. Regardless of qualifications like GPA, and regardless of the factor of race, Democratic leaners showed a stronger preference for the Democratic candidate and Republican leaners showed the same – though somewhat less strongly – for the Republican candidate. Despite the fact that it was a non-partisan task, in other words, partisanship prevailed.

In the second experiment, they conducted what’s called an implicit association test with 2,000 participants. An implicit association test, Klein writes, measures the snap judgments your brain makes at speeds faster than conscious thought. Originally developed to measure racial bias, it requires the test taker to hit a letter on your keyboard when certain word and images flash together. And based on the speed of the response, it exposes the kinds of instant judgment we make before we have time to think.

The results of the implicit association test are much the same as in the scholarships experiment: people who identify as Republicans and people who identify as conservative both code things associated with the Republican Party as “good” and things associated with the Democratic Party as “bad”; while for Democrats and liberals, it is the inverse. The results suggest that it isn’t with the rational part of the mind – the part that responds to ideas and ideologies – that people make judgments. We make the judgments based on partisan biases, and then rationalize after the fact.

For Ezra Klein, the conclusion to be drawn from this is bleak: winning an argument, at least when you’re talking to co-partisans, is less about persuasion than about delegitimization. And for political candidates, it may not be worth campaigning across party lines at all. Like other forms of fandom – sports teams, for example – party and ideology have become powerful forms of personal identity. And this changes the playbook for the worse for cynical presidential candidates, policymakers, pundits, and anybody else looking to gain followers on the cheap.

But Klein’s conclusion isn’t the only way to read this data. One of the things that his article at Vox does is publish a version of the implicit association test that readers can take online. And this, when combined with the existing results, suggest a kind of opportunity.

Yes, according to Iyengar and Westwood’s study, American voters on the whole are plagued by what looks like the partisan version of racism: we’ve grown pretty strong biases against people and institutions we identify as being members of the out-group, and in favor of people and institutions we identify as being in our camp. But we also have the tools to reverse this trend. The fact is that the mechanism by which we make political decisions does not stop at our inborn biases. We have the capacity for rational decision-making, too. And now, understanding that bias is a fact, we can be alerted, rather than resigned, to its effect. And we can be vigilant about monitoring our decision-making processes more closely.

In other words: Iyengar and Westwood’s results can be seen not just as a sign of the times, but also as a call to action. And that’s what we here at the Institute would recommend. We would recommend that you, our readers, click through to take the implicit association test, and learn just how partisan you really are. And then use that data as a starting point to listen – really listen – to what candidates for political office are saying. It will certainly turn out that you disagree with many of the positions that candidates in the upcoming elections hold. But you may be surprised to learn that – adjusting for implicit bias – your disagreement across party lines is less uniform than you probably thought.

Ezra Klein isn’t wrong when he tells us that this sort of party identification is the stuff from which candidates generate loyalty. But it doesn’t have to be. What Iyengar and Westwood’s study does is expose the technique behind the trick. It gives us the means to opt out of partisan fandom.  We can opt out.  And by doing so, we can make better choices that, in the long run, may allow us to field better candidates, too. 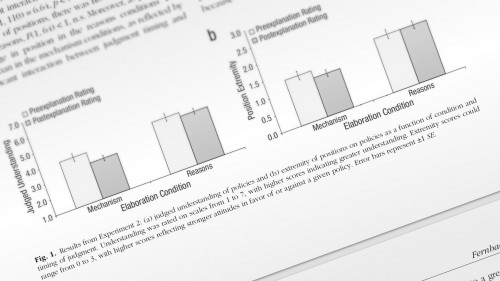