The Institute, its founders, and its definition of civility were all featured last week in the Estes Park Trail-Gazette, a weekly newspaper out of Estes Park, Colorado. In an opinion piece titled “Civility Matters. Civility Works,” town administrator Frank Lancaster frames the question of civility in terms of sport. Why, he asks, do we tolerate unsportsmanlike conduct in public discourse when we would never tolerate it on the field? Can you imagine if we had the ability to throw a flag for “unsportsmanlike conduct” in a public meeting or anonymous social media posts?

Lancaster, who became the Estes Park town administrator in May of 2012, writes that in his experience in local government, expressing your ideas and opinions in a civil manner is much more effective than ranting, raving and bullying. And by civil manner, he says, he explicitly means the formulation of civility put forth by Institute co-founders Cassandra Dahnke and Tomas Spath: claiming and caring for one’s identity, needs and beliefs without degrading someone else’s in the process.

He goes on to talk extensively about what, in practical terms, this means for how one should conduct one’s self in civic matters. He tells us, for example, to avoid ad hominem attacks: personal attacks can degrade the discussion to an “us versus them” scenario where we can lose sight of the objective. Don’t swear, he says. It is incendiary — not thought provoking. And avoid relying on stereotypes because not only is it insulting, it is counterproductive. Because no group of people all hold identical ideas and beliefs about anything, stereotyping can create a filter that interferes with our judgment in a negative way.

His purpose, he says, is to offer a gentle reminder in a time of strife. The town of Estes Park has had some fairly contentious issues to discuss as a community lately. They have, thus far, discussed these issues with civility and respect. But we can always be more effective in our public discussions, Lancaster says. And in that spirit, it behooves us to remember that courtesy and productivity are not mutually exclusive virtues.

If you want to know more about Frank Lancaster and civility in Estes Park, Colorado, click here.

The Institute’s definition of civility was featured in Columbus, Georgia’s Ledger-Enquirer, and in the Houston Chronicle, at the end of November. But it looks like we missed one: the Institute also appeared in a column titled ‘Civility Begins with Us’ in the Smoky Mountain News — a weekly newspaper out of Waynesville, North Carolina.

The November 20 column, written by retired seminary professor Doug Wingeier, offers five approaches to dealing with disagreement and conflict — withdrawing, smoothing, compromising, forcing, and negotiating. And it makes the argument that while each has its place, and while each can be approached with civility and respect, only in negotiating — and to a lesser extent in compromising — is it possible to gain a satisfying, productive result.

In coming to this conclusion, Wingeier writes about the Institute button that he wears on his jacket — Civility is Catching: Pass It On! — and he quotes the Institute’s core definition of civility, and part of the extended definition, too. Civility, he writes, is claiming and caring for one’s identity, needs and beliefs without degrading someone else’s in the process. And it is:

Disagreeing without disrespect, seeking common ground as a starting point for dialogue about differences, listening past one’s preconceptions, staying present with those with whom we disagree, and negotiating interpersonal power such that everyone’s voice is heard and nobody is ignored. And civility begins with us.

We contacted Doug Wingeier to ask why he chose the Institute’s definition, and he told us that when he Googled civility, ours was the definition that was right on target for the column, and for civic discourse in general. He continued:

I believe that all human beings, as children of God — whether I agree with them or not — are persons of infinite worth and deserve respect as such. Verbal abuse can be as damaging as physical abuse, demeans both object and speaker, undermines community, and subverts one’s objective of making a point or accomplishing a goal.

And he told us that he thought the Institute’s project was a key part in building a truly democratic society.

And if you do too — if you believe in the efficacy of civil speech and civil action to solve problems, and in the importance of treating one’s neighbors with respect, friends and adversaries alike — add your voice to ours. Click here to join the Institute for Civility in Government today. Or here to make a donation. 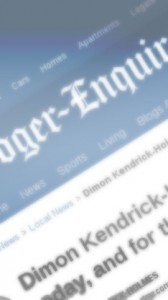 Last week saw the Institute’s definition of civility featured in Columbus, Georgia’s Ledger-Enquirer. As part of his November 22 column, The Word for Today, and for the Holidays, executive editor Dimon Kendrick-Holmes quotes it in full:

Claiming and caring for one’s identity, needs and beliefs without degrading someone else’s in the process.

And he comments astutely that it is as applicable around the Thanksgiving table — among relatives with whom one may have significant personal and political differences — as it is in Congress’ hallowed halls.

The proof, he writes, is in his own personal history. Kendrick-Holmes recounts a visit from some eight years past in which he — a veteran — opened his home to a set of relatives who had come to protest at the army base at Fort Benning, just outside of Columbus.

There were some awkward moments, he writes, like when his house guests thought it wonderful that he had spent four years living abroad, only to find out — to their chagrin — that it was as part of a military assignment.

But civility saved the day.

Civility, he writes, allows us to focus on the things you have in common, and try to listen and learn about a few things you don’t. And it insists that — from literature, to shape note singing, to the state of education in America — there are always more topics of conversation that bring us together than split us apart.

We asked Dimon Kendrick-Holmes why he chose the Institute’s particular definition of the word. And here is what he said: the usual web dictionaries weren’t giving me much more than “politeness” and “courtesy”. And when I typed “define civility” in Google, the Institute’s definition really stood out.

Dimon Kendrick-Holmes isn’t the only person who thinks so. And his column in the Ledger-Enquirer is just the latest example of how the Institute’s definition of civility — and its insistence on a more civil discourse at every level of society — continues to spread. But it cannot spread alone.

If you want to add your voice to the chorus calling for civility, click through and join the Institute for Civility in Government today. If you support the institute’s core values, and its mission to facilitate dialogue and teach respect, click here to make a donation.

And certainly, as Dimon Kendrick-Holmes tells us in his column: let’s all focus a little bit on civility this holiday season. 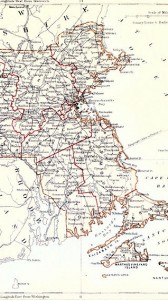 In the excitement preceding last month’s Civility Symposium in Washington, D.C., we here at The Civility Blog allowed one key story to slip through the cracks. Linton Weeks, political journalist and NPR correspondent, sat down with Institute co-founder Cassandra Dahnke to talk about the Trayvon Martin verdict, civility, and social protest.

The article, which appeared as part of NPR’s Protojournalist series, features Cassandra’s responses to questions of how to defuse volatile confrontation and how to weave civility into the national fabric.

Weeks writes that the events that took place that awful night in Florida, events now at the heart of the national dispute, show us how quickly confrontations can become tragedies. And he writes that the loud voices and rash reactions to the verdict threaten to escalate, with potentially tragic consequences.

Offering advice about how to deescalate conflict, even while expressing strongly held views, Cassandra told Weeks that civility must be our first and most natural approach to difficult situations and heated confrontations that might otherwise turn violent. Safety is always a primary concern, she said, but civility is, at the very least, worth a good first try.

Linton Weeks’s full article is available through NPR’s Protojournalist blog. Click here to have a look.