It’s difficult to talk about the issue of civility in relation to our national debate about gun violence. Acts of violence like the one we saw today on the campus of Northern Arizona University, or the one we saw last week at Oregon’s Umpqua Community College, are of course inherently, profoundly the opposite of civil. In the course of one person’s cry for attention, such heinous acts silence the voices of others, rend communities, and eliminate the possibility of a productive solution to whatever kind of problem – or perceived problem – precipitated the violence to begin with.

But beyond the event itself, our discussions of such tragedies seem to push civility away to the margins. Folks in favor of changes to gun laws hear protests that we need to respect the rights of gun owners as an endorsement of mass violence. While defenders of gun rights indulge the slippery-slope fallacy that any curb on where and how guns may be used is the first step toward an outright ban.

Part of this incivility can be put down to the adversarial nature of the campaign process in which Americans are now so thoroughly engaged. The polarization of presidential primaries means that when candidate Ben Carson told ABC News that were he in Oregon, he would ask everybody to attack the gunman because he can only shoot one of us at a time, he took the extreme position he believed he needed in order to appease his base. And when The Daily Show’s Trevor Noah responded, I think he’s overestimating how inspiring his presence might be, he went the ad hominem route he believed would make his audience laugh.

The problem, though, is that this kind of polarized response doesn’t just happen in front of the cameras. On Twitter, gun proponents who are surely otherwise civil people mix personal attacks with hyperbole, contributing to the transformation of a conversation into a shouting match. 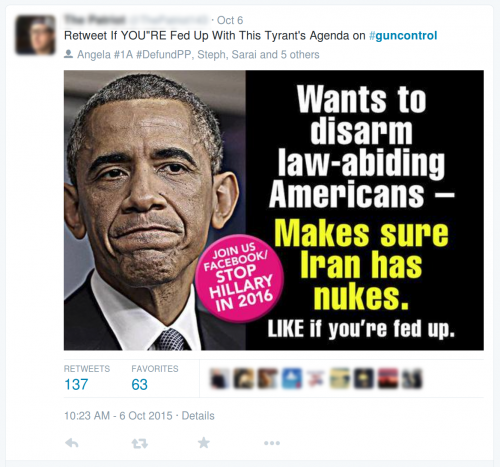 While gun opponents, elsewhere, do the same. Alex Pareene at Gawker tells gun control advocates to emulate the most extreme fringe of the anti-abortion movement, hoisting graphic signs bearing the images of dead children outside of gun stores:

If the gun control movement actually, really wants to change America’s gun culture, they will have to put the least reasonable and the least accommodating activists they can find in charge of directing the entire movement.

It’s understandable that a debate about gun violence – especially – might move people to these sorts of extremes. If we consider psychologist Abraham Maslow’s theory of a hierarchy of human needs for a moment, “personal safety” is more fundamental than “esteem,” which is where we might reasonably imagine civility falls.

We can contest the accuracy of Maslow’s hierarchy. We can say – as many researchers have done since he first published his schema – that human necessities are not so strictly segregated as he suggests and that we can in fact seek self-actualization and physiological necessities at the same time. But in this case, his pyramid is telling and it illuminates a very real problem.

In order to achieve a measure of safety where guns are concerned, we must be able to hold a civil debate. But it is difficult to have a civil debate until all sides in the discussion feel that they have achieved safety.

This is a paradox, but it is not an insurmountable one. And for our own sake and the sake of our neighbors, it is a paradox that we absolutely must surmount. The fact of the matter is that almost no gun rights advocate is comfortable with the idea that there have been – conservatively – 341 deaths in high-profile mass shootings since the year 2000. And the fact is that it is only a very few gun control advocates who believe it is either possible or advisable to part Americans from their guns entirely.

So when President Obama tells us, as he did in his comments about the Oregon shootings, that we must reconsider the notion… that our freedom and our Constitution prohibits any modest regulation of how we use a deadly weapon, we should take him at his word that he is not in fact out to ban all guns. And when a gun advocate like Representative Trent Franks says that he believes gun-free zones are magnets for shooters who deliberately choose a place where they know no one can defend themselves, we should take him at his word, too, that he is earnestly trying to advocate for a solution he thinks is right.

As much as anything, a debate about the place of guns in the future of American society has to begin with a modicum of trust that all sides of the issue are coming to the table with positions that they hold in good faith. Because it is only through that trust that civility can prevail, and it is only with civility that we can engage in the very serious discussion of this topic that we so desperately need.