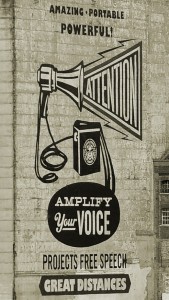 While it is obvious that we should all strive for civility in our politics and our everyday lives, there is a certain way that it is a little bit of a tricky prospect.

Political correctness, for example, does not tell us that we should not harbor resentments toward shifting demographics in the United States – and it doesn’t tell us how we can think reflectively about usefully sharing our physical or political space. Rather, it tells us that if we hold unpopular biases, we should secret them away because it is not socially acceptable for those parts of ourselves to exist, and we will be shamed if we express them.

Political correctness, in other words, shuts down communication. And good communication is key for civility to flourish.

This, in particular, is the problem with ideologies that utilize violence as a rhetorical strategy.

Violent rhetoric achieves this in two ways at once. First, it’s factionalizing. It points us toward some external enemy, real or imagined, and insists: it’s us or them. We who are insiders must stand together as a group, because otherwise the outsiders will take what’s ours.

And second, it recasts the outsiders as monsters. It suggests that because they seem unlike us, or because they disagree with us, or sometimes even because they are weaker than us, their ideas not only have no merit, they are poisonous. The needs and beliefs of those outside the faction are not three-dimensional or indicative of any actual needs and beliefs at all; instead, they are meant only to harm us and weaken our social standing.

The result is a kind of paranoia: the notion that in a world of limited resources, we must stand with the people we identify as most like us because, certainly, that’s what the next guy is doing.

The result is petty hatred: the feeling that people who don’t share our characteristics – race, or religion, or politics, or whatever other factor – are somehow inferior, or disgusting, or debased.

The result is that violent rhetoric tends to become violent deeds: first meant to stop the supposed invaders, but ultimately to suppress even the softest whispers of dissent from within.

And the result is that while civility seems like such a simple thing so much of the time, in the face of prominent figures espousing violence and threats, the high road can sometimes feel very narrow, indeed.

In light of our current national flirtation with violent rhetoric, it might behoove those of us who wish to advance the cause of civility to ask some basic questions about the place of tolerance in a pluralist society. Writing in 1947, directly in the wake of one of the most tragic outbreaks of ideologically driven violence we have known, philosopher Karl Popper suggested that there is such a thing as a paradox of tolerance: that unlimited tolerance, as he writes, must lead to the disappearance of tolerance.

If we extend unlimited tolerance even to those who are intolerant, if we are not prepared to defend a tolerant society against the onslaught of the intolerant, then the tolerant will be destroyed, and tolerance with them.

Popper, writing at the dawn of modern laws against hate speech in Europe, suggested that we should consider incitement to intolerance and persecution as criminal. That suggestion is obviously unsuitable to the culture and circumstances of the United States, and we don’t advocate it.

But he did make an important point. He said that we must distinguish between those intolerant ideologies that can be countered by rational argument and kept in check by public opinion, and those that reject rational argument – that forbid their followers to listen to anything as deceptive as rational argument, and teach them to answer arguments by the use of their fists.

As advocates of civility, we recognize that communication is key. The possibility of achieving desirable outcomes through a civil process requires that I be able to make a reasoned case for my needs and beliefs to you, and that you are able to do the same for me.

Our political system exists largely within the realm where this kind of civil exchange is possible, even if we don’t always achieve it perfectly. But we must remain ever vigilant against encroaching ideologies that reject rationality in favor of fists. Our civility, after all, makes us vulnerable to the paradox of tolerance. And if we are not careful, within our desire to accommodate a plurality of voices, we potentially plant the seeds of civility’s demise.